FROM MIDLIFE CRISIS "NOBODY" TO SOCIAL MEDIA "WANNABE"

JEFFREY: the log-line
An online animated weekly series exploring pop culture and political and social issues through the eyes of Jeffrey, a flamboyant, overweight, 55 year old man trying to stay relevant through the power of social media.

JEFFREY: the series:
Never under estimate the power of a flamboyant man on a mission. Jeffrey, refusing to be that tree in the woods no one hears fall, makes it his life’s mission to learn and use social media. He wants to harness it and using all that it entails to become vital and viral. He would love to rule the world but until then he sure is going to comment on those who do. That is, if he can remember his log in info.

Episode one sends Jeffrey on his mission to be in a boy band. This “want” takes the character through a season of never ending attempts to live outside his own undesirable demographic. Episodes explore spray tans, skinny jeans, Republicans, Dina Lohan, endorsement deals, pot plants, hair plugs, auditions, Facebook, Twitter and his own delusional charms. Like Jeffrey says, “I don’t have to be the life of the party, I just want the party to suck if I’m not there.”

“I think I am good at finding the heart and soul of my subjects through them falling flat on their faces. It’s in the moment they get back up that infuses them with charm and keeps me wanting to follow them running down their dream,” says Lund.

“JEFFREY: the series” is based on Jeffrey Morgan, Lund’s cafeteria muse, as he likes to refer to him. “I would hear him ‘working’ the salad bar at in the cafeteria at work,” Lund remembers. “He would be entertaining everyone in line with his random comments and I would say to myself,  ‘their salads just got a whole lot tastier!’” Dan, having never really met Morgan, approached him and asked if he would mind being used as a jump off point for an animated web series. He told Morgan it was about a middle-aged, flamboyant guy whose midlife crisis was to be in a boy band. Without missing a beat, Morgan said “Honey I am a boy band!” Lucky for Lund, the real live Jeffrey was a SAG actor and had a history in TV, stage and a flair for writing.  A week later, everything to put the show in motion was complete and “Jeffrey: the series” was born. Since then, a season’s worth of scripts were written, animated and Morgan voiced his animated alter ego.

With the help of Colbert Fennelly, a long time colleague of Lund’s, serving as producer “Team Jeffrey” is ready to share their character with the web world and they look forward to the web world’s influence on Jeffrey. “The animated character of Jeffrey is a living thing and we want the social media audience to becoming active participants in his world as he is participating in theirs,” says Lund.

JEFFREY: the outlets:
This character was designed to struggle with various social media platforms as he attempts to get that coveted label “viral” attached to him. Through the animated series, comic panels, blog posts, tweets and Facebook engagement, Jeffrey can comment on all things social, political, pop cultural and personal, keeping the character as a personality alive well beyond the series.

JEFFREY: as guest or for hire:
The creators of Jeffrey look forward to collaborating with other outlets. The animated character can be hired to promote events, pitch products, be a guest, contribute written material in the form of ongoing columns, review TV, theater and movies and any other creative sandbox imaginable.

How nice it will be when the day comes that the Kardashians are losing gigs to Jeffrey!

JEFFREY: preview:
To review the first three episodes of JEFFREY: the series, please use the links below with the password  boyband  to access each video.
Lo-Res Rough Cuts 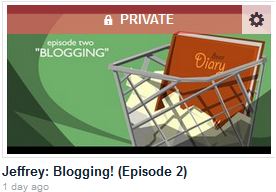 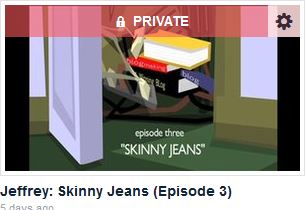 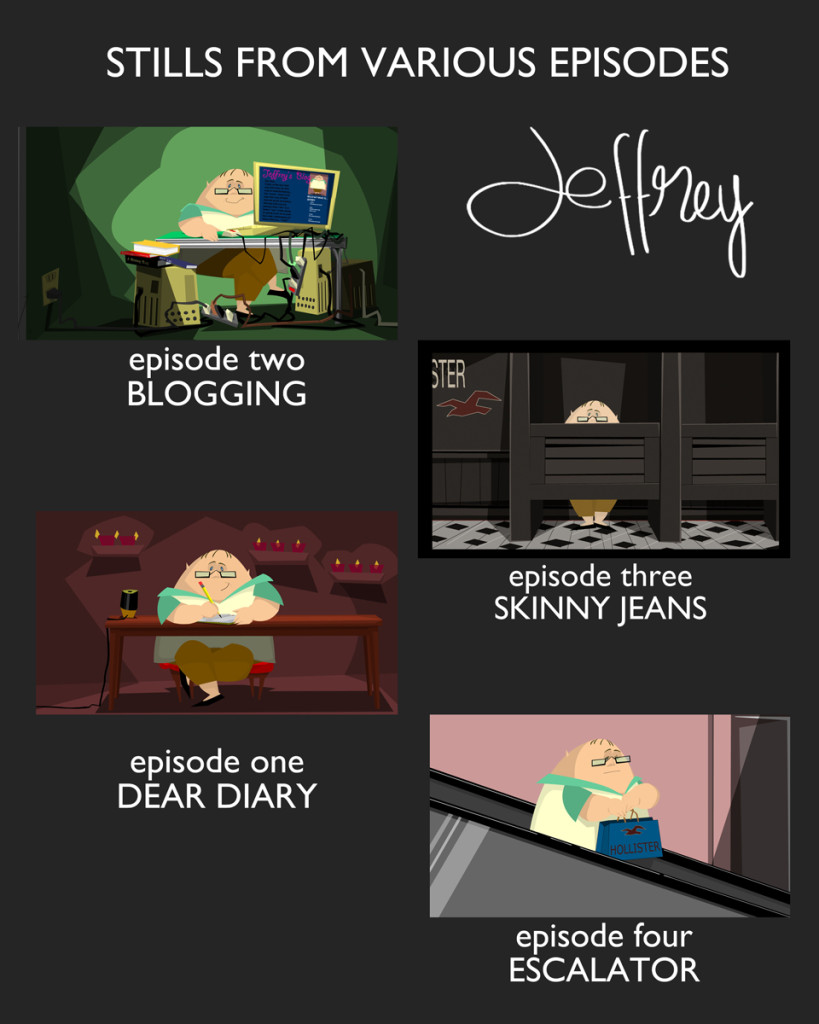 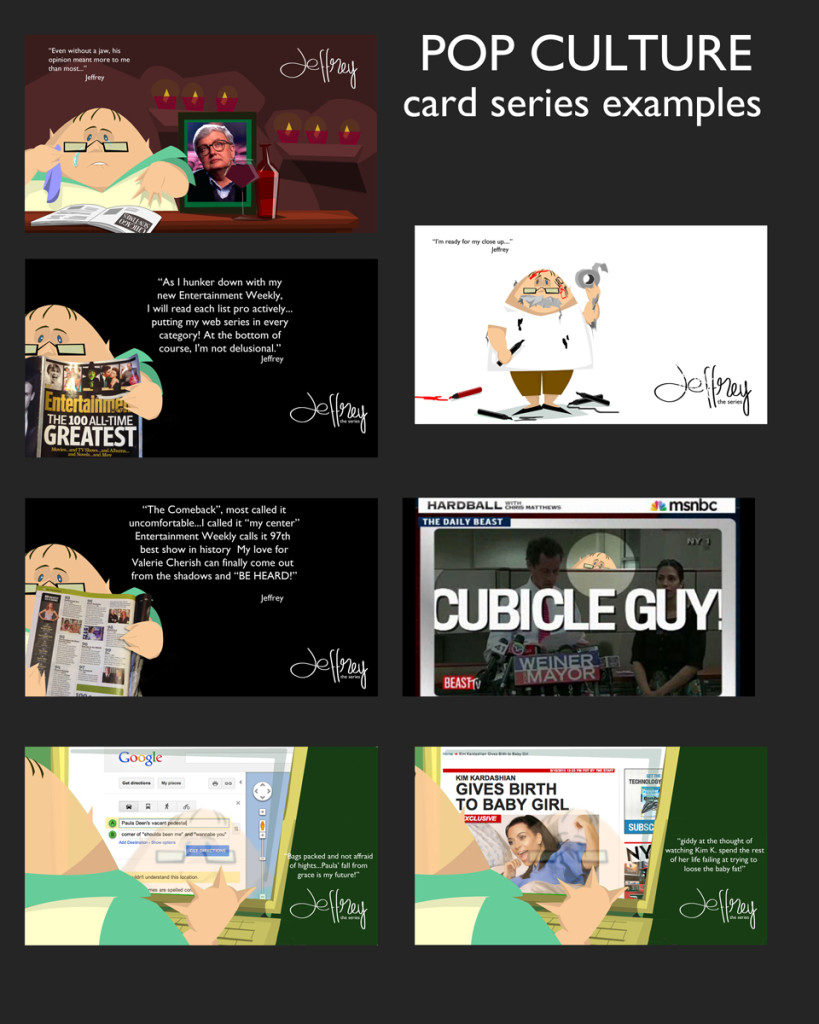 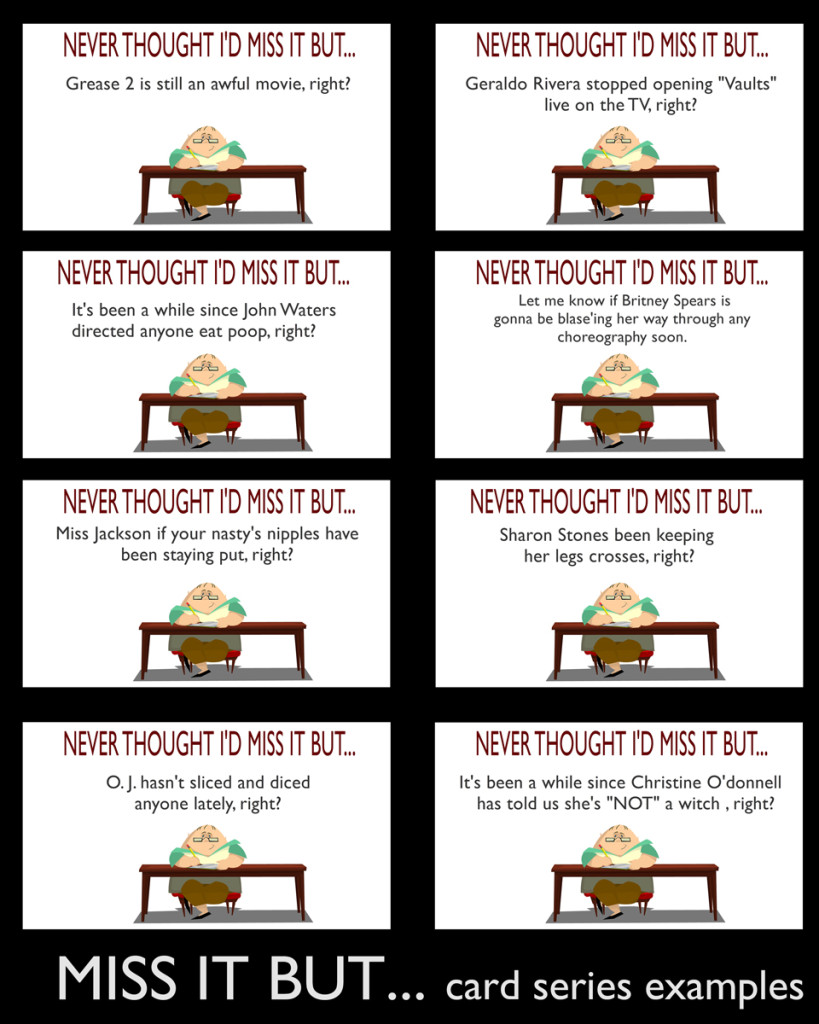 View all posts by: Jeffrey